[Singapore - Photographs]. Sachtler, August, and others. Views of Singapore and surroundings.

20 large uniform albumen prints (210 x 270 mm), all but one in landscape format. Each print mounted on paper boards (245 x 325 mm) with a manuscript series number and a German caption. Stored in a modern black cloth clamshell box with a red morocco label ("Singapore").

A uniform set of large photographic albumen prints of Singapore, including exterior views of traditional, European, and mixed-style buildings, landscapes, the botanical gardens, etc., many with European and/or Malay people in the scene and some with horse-drawn carriages, or boats. The two views from Fort Canning have been attributed to August Sachtler (ca. 1839-73): one looking southwest toward Telok Blanagah village and its hill, with a Malay man in the foreground; the other looking southeast toward the roadstead, with many ships in the background and a canon in the foreground, at least the former published in the National Museum of Singapore's catalogue "The Image of Our Landscape" (2009). Sachtler gained experience as a photographer in the Prussian expedition to Japan and China (1860-62), came to Singapore in 1863 and worked there as a commercial photographer until his death in April 1873. He may be the author of some of the other photographs as well. They show the Jamae Mosque (ca. 1835) and Sri Mariamman Hindu temple (ca. 1827; the tower and wall to the left differ only slightly from those in a dated view of 1866: the tower was completely changed in the early 20th century); six views of the botanical gardens established by Whampoa (1816-80); a jungle plantation in operation (with 4 boats); jungle houses built on wooden stilts with roofs and some walls of reed; the Hôtel de l'Europe (either that on St Andrew's Road, demolished in 1906, or its predecessor on Beach Road); the mission chapel; the gothic revival St Andrew's Cathedral (ca. 1861); Raffles Square (named Commercial Square by Stamford Raffles in 1823 but changed to Raffles Place in 1858, the name in the photograph apparently retaining the older name); the town hall (ca. 1862: the offices moved elsewhere in 1893). The view of Raffles Place clearly shows the signboards of the shops: G. Schiller; Geokteat & Co; John Little (department store established 1845), and Singapore Dispensary (these last two are also visible in an album presented to Prince Alfred, Duke of Edinburgh in 1869).

Two of the photographs have lettered captions and numbers as part of the photographic prints themselves, in white sans-serif capitals in the lower right corner: "Bot. Garden S. 200" and "Raffles Square S. 212". Most have a number in the lower left corner, written after the print was made, ranging from 3 to 200 (matching the number in the print, but the print with number 212 has no written number). Each has a number written on the mount, along one long edge (the head except in the one photograph in portrait format) ranging from 109 to 139, not corresponding to the other numbers.

As usual for albumen prints, the sky in the background shows little or no cloud detail, and two or three have lost a bit of detail in the background, but all further preserve very detailed images and are in very good condition, with only occasional minor spots. A remarkable set of large, detailed and well-preserved historical images of Singapore ca. 1870.

For Sachtler, see the report of a lecture by Sebastian Dobson on oag.jp. 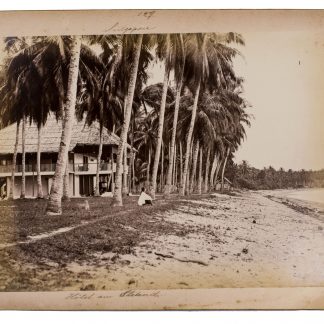