A well-preserved copy of this 18th century atlas of the classical world, containing maps of remarkable quality, skilfully coloured. Beginning with a map of the entire ancient world and one of Europe, it includes several European countries as well as Asia and Africa, with maps of Arabia, Persia, Syria, Palestine, and Egypt. The plans show the cities of Rome, Athens, and Jerusalem as well as the camp of the Israelites in Sinai. Bringing up the rear, maps no. 43 and 44 provide an overview of the political situation in Europe, Northern Africa and parts of Asia in the 5th century. The cartouches surrounding the maps mostly consist of numismatic elements, some also containing figural depictions. An illustration of the Titan Atlas constitutes the centre of the engraved title.

Wants the engraved dedication and portrait. Contemporary ownership of M. Elias to flyleaf. Binding slightly rubbed, hinges starting. Paper slightly browned; margins of the flyleaf, the title-page, the index and of maps 19-27 more noticeably waterstained. One large crease to the table of contents. From the library of the Viennese collector Werner Habel, with his signed and stamped ownership, dated 1979, to the pastedown. 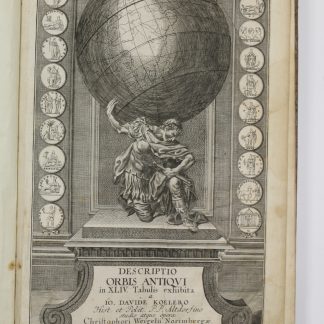