The "al-Taysir" ("Theysir") of Ibn Zuhr, and the "al-Kulliyyat" ("Colliget") of Ibn Rushd, here edited by Hieronymus Surianus. This is the fourth edition in all, the first having appeared in Venice in 1490. Printed by the press of Gregorius de Gregoriis, which in the same year had produced the first book entirely printed in Arabic, the famous Fano Book of Hours.

The "Taysir" and the "Kulliyyat" were composed as complements to a comprehensive medical work on the anatomy of organs, health, disease, clinical symptoms, drugs and food, hygiene and therapeutics. Ibn Rushd, not himself a practicing physician, wrote on the generalities of medicine and invited Ibn Zuhr, one of the pre-eminent clinicians and medical therapists of Moorish Spain, to write on the particulars. The resulting book was Ibn Zuhr's most important work, and it was highly influential in the West until the Renaissance.

"Although a true follower of Hippocrates and Galen, [Ibn Zuhr] developed numerous original ideas through his medical experimentation and observation. [He] wrote on the therapeutic value of good diets and on antidotes against poisons, and cautioned against deliberate uses of purgatives in treating the sick, who needed curing medications, not 'poisons' [...] He also recommended tracheotomy" (DSB XIV, 637f.).

Provenance: Hand-drawn armorial shield, "Maureni" (?), Verona, 1656. A clean, appealing copy with insignificant worm damage to binding, affecting the margin of the first two and the last two leaves (professionally repaired; no loss to text). No copy in trade records. 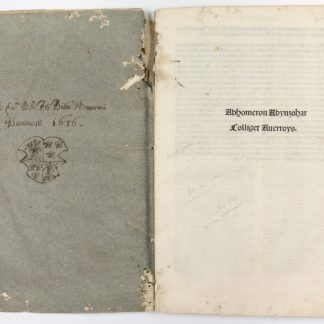