8vo. 248, (4) ff. With emblematic woodcut device to title (apparently showing Abderus being devoured by the mares of Diomedes) and several woodcut initials. Contemporary full vellum with traces of ties.

Uncommon and finely produced edition, by an unidentified Parisian printer, of Mesue's pharmaceutical handbook, translated into Latin by Jacques Dubois, the teacher of Vesalius. The author's frequently reprinted treatises bore an immense influence on the development of pharmacy in early modern Europe. Although the identity of Masawaih (Mesue) remains unclear, he was likely a Persian Christian physician who headed the Baghdad hospital and served as personal physician to several caliphs (though he may also be a collective pseudonym of several Arabic medical writers of the 10th and 11th centuries). Products of the mediaeval Islamic world, the works attached to his name contained many innovations that provided the basis for the theory and practice of pharmacy for centuries and perfectly met the demands of the developing medical marketplace of mediaeval Europe.

Slight brownstaining with some marginal worming near the end of the text. Loss of corner to fol. Aa3 (not affecting the text). 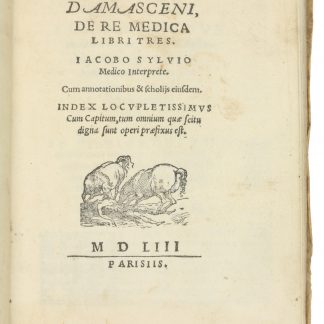