Mediaeval poem on corals and gemstones, attributed to an Arab king

4to. (108) pp. With woodcut title vignette and 7 woodcuts in the text (one full-page). Modern calf using the remains of a 16th century binding with blindstamped rules and roll-tools. Edges red.

Rare 16th century edition of this poem on gemstones, ascribed to the legendary Evax, king of Arabia, and sometimes entered in bibliographies accordingly (cf. BM-STC or Thorndike I, 776), though in fact written by Marbod, the bishop of Rennes, in the late 11th century. The book, which survives in more than sixty manuscripts, was first printed in Vienna in 1511 as "Libellus de lapidibus pretiosis"; the present Leipzig edition is only the third to attribute authorship to King Evax on the title-page. Sources include Pliny, Isidore of Seville, Origines, Orpheus, and Solinus. "In short, Marbod's work briefly describes 60 gemstones, which number includes several that are not now considered to be in that category, and gives for each their magical and medicinal virtues" (Sinkankas, p. 665). They include mythical stones, mineral species such as emeralds, onyx, magnets, carbuncles, hematite, asbestos, etc., with numerous varieties of quartz, stones coming from the body of an animal, and several other hard substances that are not really minerals at all, among which is coral, described as "a stone that lives in the ocean, forming branches like wicker" (E3v).

"One of the questions connected with this work is whether it is by Marbodus or by an Arab called Evax. It has arisen because the poem opens with an allusion to a person of that name. Lessing does not see why Evax should not have written a work on precious stones, or why Marbod should have said that his poem was extracted from Evax's work, if it were not so. Reinesius thinks Marbodus made himself the interpreter of Evax" (Ferguson). Today, all scholars "agree that Marbod was the true author and Evax an invention" (Sinkankas). The present editor, the German humanist Henrik Rantzau (1526-98), was an associate of Tycho Brahe. At the end of the book he includes an illustrated genealogy of his own family. He "states that the poems of Marbod are here issued completely for the first time 'as far as he knows', although this is not the case" (ibid.).

Rather severely browned throughout; several 17th century underlinings and marginal annotations. Gutter repaired and completely rebound in the 20th century with modern endpapers but using old material for the covers. 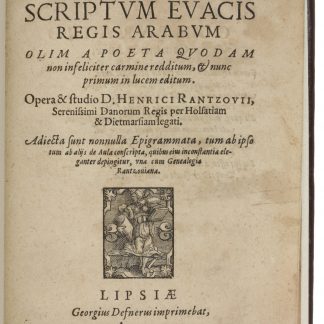