With a very attractive map of Arabia

Johannes Matalius Metellus (ca. 1517-97) was a French jurist who spent his early life travelling in Italy. Later Metellus moved to Louvain. Around 1579, he became involved in Cologne's cartographic publishing industry, when he is thought to have contributed to the "Itinerarium Orbis Christiani". He also contributed a description of Lyon to Braun & Hogenberg's "Civitates Orbis Terrarum". There is a very attractive map of Arabia. "His map of Japan is the earliest known copy of Teixeira's map, which had appeared in Ortelius" (Walter 20). Metellus was a friend of Matthias Quad, whose name is sometimes associated with the posthumous completion of the Metellus atlas of the Americas (it was published in 1598; Metellus is thought to have died in 1597). The cartographer was also in correspondence with Abraham Ortelius. At one point he gave Ortelius assistance collating Ptolemy's Cosmography with manuscripts in the Vatican. This was evidently needed for the completion of Ortelius's "Parergon Theatri". 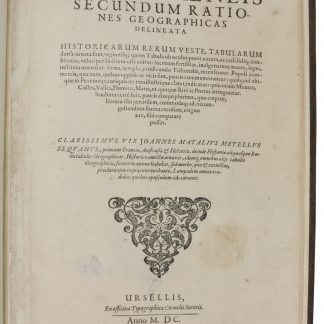