Incunabular edition of an influential second century description of the classical world, including early mentions of China and Arabia

A famous description of the antique world, originally written in Greek verse around the beginning of the second century AD by Dionysios Periegetes, also known as Dionysius of Alexandria, including early mentions of China and Arabia. The poem exerted a great influence during the Middle ages and remained popular well into the Renaissance. One of its main appeals are the literary descriptions of faraway countries, which leave more space for imagination than the more scientific geographical descriptions like those of Mela and Solinus.

It was translated into Latin prose by the Veronese humanist Antonio da Beccaria and first published a year earlier by Erhard Ratdolt, the former partner of Franz Renner, two German printers active in Venice. The poem had first appeared in print in a free verse translation in Priscian's Opera in 1470.

"Until the thirteenth century, Asia beyond India was practically unknown in Europe; only vague references to the Serica or Sinica of the Graeco-Romans helped keep alive a sketchy knowledge of China's existence". Mentions here in Dionysius's text referring to "Thina" hark back to the mentions in the Periplus of the 1st century AD, which were the earliest surviving accounts in European literature (Löwendahl).

Dionysius lived in Pharos, an Alexandrian neighbourhood, at the time of Hadrian (117-138). Further information in the poem suggests a date of composition before 130. At that period, geography was not deemed an important component of the school curriculum but rather an ancillary subject to rhetoric. Dionysius composed his poem with these didactic ramifications in mind. In addition to imparting geographical knowledge, he wanted to acquaint the students with the great classical authors, notably Homer. He therefore composed his poem in hexameters, after Homer, and included many mythological place names, for instance from the journey of the Argonauts, but also the borders of the historical empire of the Seleucids. In this manner, the "Description of the inhabited world" became a guided tour through the world of antique geography.

Some minor waterstains in the margins of the second half of the volume, the first and last leaves reattached and some occasional foxing, otherwise in very good condition, washed. 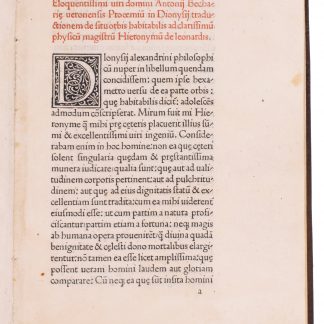