Exceedingly rare account of a five-and-a-half-month journey from Bombay to New York by the Indian-born American merchant Ballantine, carried out in an attempt to acquire as much information as possible on commerce in Persia. Setting out from Bombay on 7 May 1875, Ballantine visited Karachi, Muscat, Ormus, Bandar Lengeh, Bahrain, Bushire, Shiraz, and Tehran, as well as Moscow, St Petersburg, and Stockholm before reaching London and Liverpool. Conceived as a commercial report, the travelogue covers currencies, weights and measures, and matters of export and import as well as pearl fishing, silk production and opium culture. It also describes the local climate and infrastructure, including water supply and telegraph lines, the ruling Sultan and Shahs, and the Arabian way of life (especially mentioning coffee). In his conclusion, Ballantine calculates the total cost of his journey at 265 pounds in railway, steamer and caravan fares for himself and his servant, a sum which he compares with cheaper modes of travel. The frontispiece shows a bird's-eye view of Bombay, while the plates depict a bazar in Ispahan, Char Bag and the palace at Ispahan, the southern gate of Tehran, the Shah of Iran, and the Tehran Royal Audience Hall.

Extremities very slightly bumped, inner hinges starting, but in all a fine copy, the interior clean and crisp. Pencil ownership of Mrs. John F. Spring of Greenfield, MA, on flyleaf. A single copy in auction records; the London 1875 edition cited by Wilson would appear to be a ghost. 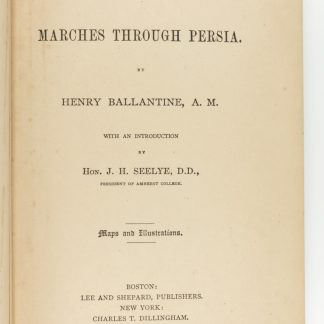