Fremont, John Charles. Map of an exploring expedition to the Rocky Mountains in the year 1842 [and to] Oregon and north California in the years 1843-44.

Interesting and beautifully lithographed map of previously almost entirely uncharted parts of America still inhabited by the Utah, Sioux and Pawnee Indians, considered one of the most important maps of the western United States issued in the first half of the 19th century. Wheat noted that "John Fremont's map of 1845 represented as important a step forward from the earlier western maps of the period as did those of Pike, Long, and Lewis and Clark in their day".

The map includes parts of the States of Oregon and California in the West, via parts of Nevada, Idaho, Utah, Wyoming and Colorado, to parts of Nebraska and Kansas in the East; from the west coast the mouth of the Columbia River, Fort Vancouver (Portland) in the Northwest, via San Francisco to St. Barbara, Ventura and the outskirts of today's Los Angeles in the Southwest, through the Rocky Mountains, the areas of the Utah, Sioux and Pawnee Indians, in a kind of triangle to the Missouri River and Fort Leaverwood near today's Kansas city and Westpoint in the East (an area of approximately 1,300 x 2,600 km).

The map is from Fremont's "Report of the Exploring Expedition to the Rocky Mountains", which includes the first accurate depiction of the Great Salt Lake. "Though the Oregon Trail and the Spanish Trail had been regularly used for a few years there were no dependable maps. For other parts of Fremont's route, much of the recording of his map was new, including the whole extent of the Sierra Nevada Range, the California rivers from the American River south, and the three Colorado rivers" (Streeter). It is therefore hard to overestimate the influence of this map, which left only minor areas unmapped or unexplored with the exception of the Great Basin. Wheat states that it "radically and permanently altered western cartography".

John Charles Fremont (1813-90) was a young and ambitious lieutenant in the Corps of Topographical Engineers. Together with the Frenchman Joseph N. Nicollet he completed the first truly scientific survey of the interior during 1838-39. He was the son-in-law of the powerful Senator Thomas Hart Benson from Missouri and under his influence he undertook three further expeditions to the west. Arriving in the United States in 1834, Fremont hired Charles Preuss as a cartographer and draughtsman. Preuss would go on to draw both of Fremont's other highly important maps of the west.

Some soiling and spotting, otherwise in good condition. 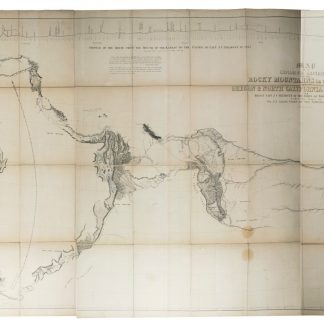