Inscribed by the author in Arabic

Wolff, Joseph. Narrative of a Mission to Bokhara, in the Years 1843-1856. To Ascertain the Fate of Colonel Stoddart and Captain Conolly.

Fifth edition. The German-born oriental scholar and traveller Wolff (1795-1862), who knew both Arabia and Muslim Asia, brought the first authentic account of the fate of the two officers Stoddart and Conolly to England (having been commissioned to do so by a committee headed by Captain John Grover): they had been beheaded at the command of the Emir of Bukhara (Usbekistan), Nasrullah Khan, in 1842. Their executioner had been instructed to dispose of Wolff in the same way, but he escaped after a series of remarkable adventures. "A Jew who converted to Christianity, he spent much of his life attempting to persuade other Jews to follow the same course. His travels were often beset by extraordinary difficulties, but his enthusiasm and vitality enabled him even to endure, after rescue from slavery in Khorassan, a walk of six hundred miles through Bokhara to Kabul, having been robbed of everything including his clothing" (Blackmer). Between 1845 and 1852 his account of his mission went through seven editions.

Inscribed by the author in English and Arabic to the Victorian historical writer Agnes Strickland (1796-1874): "To Miss Agnes Strickland / from her admiring / friend Joseph Wolff" (dated May 14, 1849). 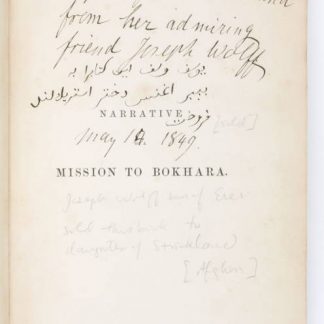