A collection of ca. 55 formulas for various ointments, balms, cataplasms, electuaries, boluses, tinctures, and other kinds of medicines, with remarks on their usage and administration. Though written in the vernacular, the usage of Latin names for the components of the drugs and their complexity point to a professional audience of doctors and pharmacists. The manuscript is compiled from the 2nd edition of Henry Banyer's "Pharmacopoeia Pauperum" from 1721. Banyer (1690-1749) had studied at St Thomas' Hospital in London and practised as a physician at Wisbech, Cambridgeshire. On 30 July 1746 he was admitted extraordinary licentiate of the College of Surgeons. His "Pharmacopoeia Pauperum" was first published in London in 1718 and saw three re-editions until 1739.

Very slight foxing and some browning to the margins. Binding markedly worn. Removed from the Newport Reference Library with their bookplate to the front pastedown. 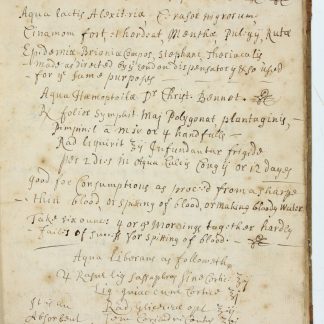