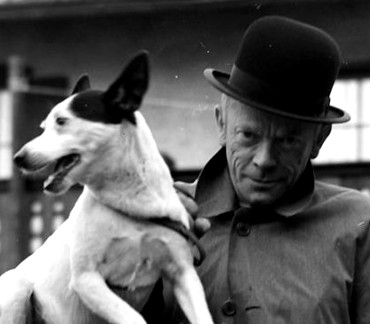 Karl Valentin, born Valentin Ludwig Fey, was a Bavarian comedian, cabaret performer, clown, author and film producer. He had significant influence on German Weimar culture. Valentin starred in many silent films in the 1920s, and was sometimes called the "Charlie Chaplin of Germany". His work has an essential influence on artists like Bertolt Brecht, Samuel Beckett, Loriot and Helge Schneider. He developed a reputation for writing and performing short comic routines, which he performed in a strong Bavarian dialect, usually with his female partner, Liesl Karlstadt. His art centered mostly around linguistic dexterity and wordplay—Valentin was a linguistic anarchist.