[Löwy, Josef, Austrian photographer (1835-1902)]. Correspondence archive. A collection of 98 letters, a lettercard, and 2 visiting cards, all to the Viennese photographer and publisher Josef Löwy.

A comprehensive trove of communications written by an international, often aristocratic clientele to the Imperial and Royal court photographer Josef Löwy, offering interesting details regarding the scope of his services, his fees, quantities and types of portraits ordered, and occasional special requests.

The Löwy Atélier established itself as one of the favourite studios of the Austro-Hungarian monarchy's high society during the heyday of Franz Joseph's government. Apart from providing portrait, art and industry photographs as well as reproduction services, Löwy appears also to have covered the field of erotica: the British veterinarian William Fearnley, for example, requests some "very fine coloured photographs of Ladies" such as he says he has seen at a friend's: "I would like them as [straight] as you have. Cabinet and others [...]" (22 Nov. 1871). Prince Leander Poninski, on the other hand, requests a special "watchkey" which would reveal "the photograph of a person when viewed through a hole against the light" (1872), while Eleonore von Auersperg (1864-1920) wishes "butter boards", to be decorated with photographs of her children (1 Feb. 1892). The collection also gives evidence of Löwy's collaboration with artists such as his colleague Jakub Husník: "Please convey to me the large glass positive of the nude study, for which I enclose 8 guilders [...]" (18 March 1874). Löwy worked with the writer and linguist Karl J. Schröer on his book "Das Bauernhaus mit seiner Einrichtung und seinem Geräthe" (Vienna, 1874; cf. letters dated 21 August and 15 September 1873). The wide range of Löwy's work is showcased by the orders for photographs of the Viennese World Exposition by the Royal Art Cabinet in Munich (two documents and two letters from July 1873 through January 1874), by the technician Julius A. Hülsse in Dresden (30 July 1872), and of landscapes and railway photographs for various schools. Further commissions come from the Imperial and Royal Central Institution for Meteorology and Geomagnetism (22 Nov. 1876) and from the monastery of Klosterneuburg (24 and 27 Oct. 1872); his work for the "Costume Festival" hosted by the Gesellschaft der Musikfreunde is singled out for praise (2 Feb. 1876).

Yet the archive also reveals dissatisfied customers and partners, such as the painter Anton Fink, who complains that Löwy pays only for "accepted pictures": "Likewise, it was a lie that the print of young Baschan was returned to you after delivery supposedly was refused [...]" (26 June 1873).

Mostly with recipient's notes on the reverse. Some waterstains, light ink offsetting or smudging, some items a little foxed or browned, but generally well preserved. A detailed list is available on request. 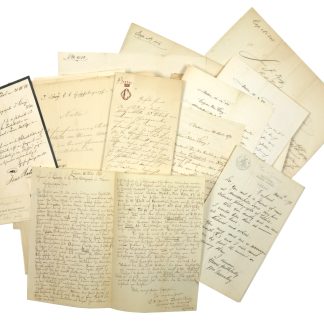