Below the printed portrait, which occupies most of the cover page, Big Chief has penned the words, "How. Big Chief White Horse Eagle. Worlds Famous Chief Born 1822. Age 107". In the upper left corner, his second wife, a white woman called "Queen Wa-The-Na" by the Indians, writes, "God bless you all", to which some illustrations are added (three tipis and a stylized Indian motif). The inside pages bear a printed poem, "The Indian's Lament", "By the Honorable Big Chief White Horse Eagle", in 26 rhyming couplets which bear much affinity to several English Renaissance and Romantic poems, with some passages less than distantly reminiscent of Shylock's plea in "The Merchant of Venice". On the back: ALS by the "Queen" to the Austrian autograph collector Maria Sander: "In looking over our mail I find your letter and request for Big Chief's autograph. [...] I know you will appreciate having this wonderful 'Lament' written by the Big Chief. [...] We are having a wonderful time in this beautiful country. Big Chief is a century of living history and the best known and best beloved man living to-day in the world. He joins with me in sending greetings and God's blessings that you may have health, peace and happiness." With pen drawing of an Indian feather.

White Horse Eagle travelled America, Europe, and Asia, claiming to be an Osage and chief of 105 Indian tribes and bestowing chief's honors on white celebrities wherever he came. He apparently attracted Maria Sander's attention during his Grand Tour of Germany in the Spring and Summer of 1929: he had made a sensational arrival in Berlin on April 18 in full chief's array and a feather head-dress of several meters in length. He requested to shake President Hindenburg's hand, as he allegedly had done with Bismarck during his first Grand Tour in 1887. He proceeded to visit the Berlin Anthropological Society and the grave of Karl May, Germany's cult writer of westerns. After hiring on a German Wild-West circus similar to that of Buffalo Bill's, he dictated an autobiography to the Nazi historian Edgar von Schmidt-Pauli, whose aim of proving the superiority of the 'Aryans' seems to have been neatly complemented by White Horse's stirring laments over the dying Indian race. The Viennese artist Steffi Ventura painted his portrait. Later, White Horse fell into disrepute: his alleged tribesmen complained that he spoke not a word of their native language, that he knew nothing of Indian culture and religion, and that the only God he held dear was alcohol. Finally, it was apparently proven that he had African Americans among his ancestors. His age had never been believed, anyway.

With envelope addressed in the "Queen's" hand. Fine autograph of this colourful, albeit dubious persona of American history. 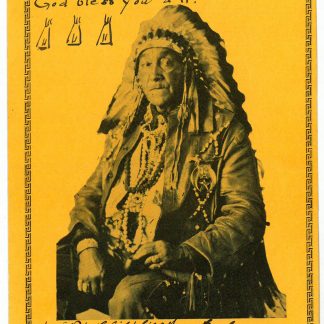