Large 8vo. A total of 257 letters and correspondence items, mostly in French, but also in Italian and German. Filed on pins in a contemporary half-leather "Biblorhapte" portfolio (L. Girard) with giltstamped spine label "Correspondance", marbled endpapers and brass filing mechanism.

Diplomatic correspondence addressed to Eugene d' Halwin Marquis de Piennes, mostly from 1861 and often concerning the Garibaldi's wars of independence and the unification of Italy under Victor Emmanuel II. Among the writers are Antoine Alfred Agénor Duke of Gramont (French statesman and diplomat, 1819-80), Prince Ladislas Czartoryski (Polish politician in exile and collector, 1828-94), and Jules DuCros-Aubert (French diplomat, 1833-81). Of particular interest is a small card, privately printed in red and green by a very rough process (perhaps a potato print), bearing the motto "V[i]v[a] Vittorio Emanuele Re d'Italia" and the arms of Savoy-Piemont trägt.

The diplomat and statesman de Piennes, from an old Northern French family, served as embassy secretary in Lisbon, St Petersburg, and Rome since the 1850s. He was a friend and patron of the sculptor Jean-Baptiste Carpeaux. After his return to France in 1862 he was made councillor general to his native département of Manche, serving until 1870, and mayor of his native city of Périers. As chamberlain of Empress Eugénie (1863) he introduced Carpeaux to the court; he secured funds for the restoration of Mont-St-Michel and for many projects in the Périers region. After the end of the Empire he retired from politics and relocated to Croatia, supervising the construction of the Balkan Railway financed by Baron Maurice de Hirsch. He presented his large collection of art to the Strossmayer Gallery in Zagreb and passed away in Vrbovec. 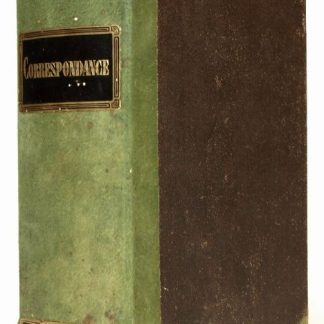