The Emperor's Hunt: Trespassers will be Prosecuted

4to. 1 p. Counter-signed by the official Johann Georg Hoch.

Clipping of the lower right corner of a hunting mandate, the "Jäger-, Hötz- und Paiß-Ordnung (Neuntes General)", which states the borders of the Imperial hunting grounds in the south-eastern quarter of today's Lower Austria and forbids trespassers to hunt there. 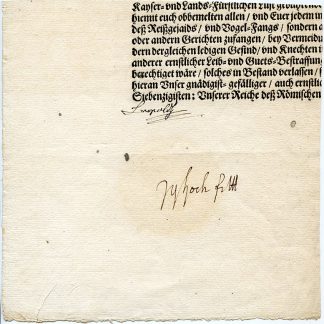