Each puzzle measures 195 x 245 mm. Each puzzle with an engraved plate mounted on thin wood, coloured by a contemporary hand and cut to form a jigsaw puzzle, with engraved caption and short description below the image. Stored in the original cardboard box with an etched and engraved sample plate for a fourth puzzle (with caption "Équité de l'empereur") on the top, coloured by a contemporary hand, and an embossed gilt-paper border. Each puzzle with the original pink paper wrap-around slip preserved.

A fine and colourful set of jigsaw puzzles depicting scenes from the life of Napoleon Bonaparte. Two of the puzzles and the sample plate have the address "Ulysse Paris" engraved in the image. Each puzzle has 20 pieces: the first depicts Napoleon calmly sleeping in a chair after having given orders to his generals on the eve of the battle of Austerlitz (1 Dec. 1805); the second shows Napoleon addressing an exhausted soldier - a scene from the battle of Lodi on 10 May 1796, fought between Napoleon's forces and the Austrian rear guard commanded by Johann Beaulieu. The third puzzle shows Napoleon as merciful emperor, receiving the thankful wife and children of a Prussian lord accused of conspiracy, whom he pardoned. The puzzle matching the scene depicted on the top of the box is not included. A few pieces cracked at thin spots; box slightly defective with traces of handling and browned. A good set. 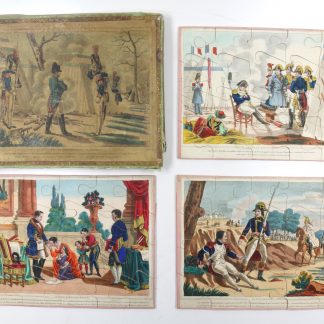