To a baroness, with the request that she be kind enough to excuse the writer for the evening, as he is expecting a visitor: "[...] After my return from Carlsbad, to which I am journeying on Monday, I will have the honour of paying my respects. A most sincere kiss to your Hand | Gustav Walter".

The singer, from the Bohemian town of Bilin, made his debut in 1855 as Edgardo in Donizetti's "Lucia di Lammermoor" at the Municipal Theatre in Brünn. From 1856 onwards he was engaged as tenor in Vienna's Hofoper, where he excelled in playing Mozart parts, and was later named as an honorary member. He played to great aclaim Manrico in "Troubadour" (1859), the duke in "Rigoletto" (1860) and Walther von Stolzing in the "Meistersingern" (1870). After his departure from the stage he began an illustrious career as a concert and ballad singer. He was also sought after as a singing instructor and was named as a Professor in the Vienna Conservatory. 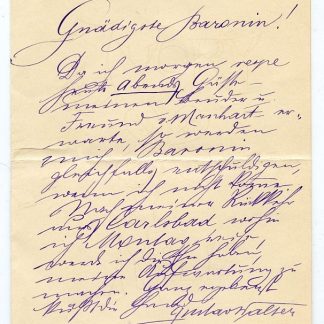