Announcing the performances of "Don Ranudo de Colibrados" and Kotzebue's "Der arme Poet" on Dec. 27, as well as the "Lästerschule" on Dec. 28. 12. (Iffland playing Don Ranudo, Lorenz Kindlein, and the Baron); Shakespeare's "Merchant of Venice" on Dec. 29 (Iffland in the role of Shylock); and, finally, of Goldoni's "Der gutherzige Polterer" (Iffland's translation, with him playing Morhof) and Kotzebues "Der häusliche Zwist" (Dec. 30).

Iffland, who had created a sensation in 1782 as the first "Moor" in Schiller's "Die Räuber", gave his final performance in Weimar in the last days of December 1812. Goethe, who had previously succeeded in bringing the actor to Weimar in 1796, attended all performances and was Iffland's host on Dec. 28. A few days before Iffland's arrival, Goethe had written to Zelter: "It is probably one of the rarest of phenomena, and one, I think, that has never occurred with any other nation, that the greatest actor should generally select for himself parts, which are intrinsically unworthy of him, though, by his acting, he knows how to invest them with the highest momentary value" (12 Dec.) A few weeks after his departure, Goethe wrote: "Iffland's presence was a great delight to me. I gave myself up to the pure enjoyment of his talent, endeavoured to understand everything as he gave it, and did not trouble myself about what he gave [...] Thus I have greatly admired Iffland's way of throwing life into dead plays, - nay, his creation out of nothing [...] In addition, I thought it remarkable, that Iffland, who, in his written plays, aims at the most ample breadth, in his acting, conjures up again the conciseness and terseness of plays that are extemporized. How different our stage would seem, if he had not been forced to take this roundabout way [...]" (15 Jan. 1813).

Somewhat brownstained and wrinkled; slight edge defects; traces of folds and sewing. Numbered at the upper edge by a contemp. hand: "21"; "33"; "37". 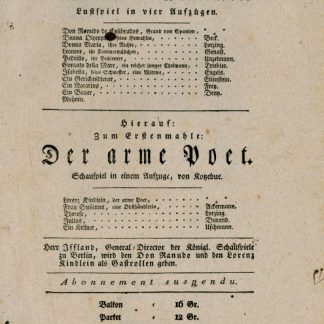