The original autograph contribution of Hajd Thami Glaoui to the Committee of the World League for Peace (Ligue Mondiale pour la Paix), a remarkable organisation formed in 1925 with close ties to the League of Nations. The Committee itself was composed of such notaries as Queen Elizabeth of Belgium, King Carol II of Romania, John D Rockefeller, Marie Curie, and Albert Einstein, who personally gathered the present manuscripts over the course of seven years (1925-32). Among the public figures who contributed to the project were dignitaries from the newly-created League of Nations' member states. The present manuscript has been studied extensively by native Arabic scholars, who nevertheless have been unable to decipher the Pasha's handwriting (see accompanying document). "Praise be to God! [...] war and establishing peace is the goal of every human being [...] decisions [...] goal. Truth is victory [...] nations [...] purposes [...] the League of Nations [...] he who knows his goal must strive to support [...] and peace. [Signed] Hajd Thami Glaoui". Thami Glaoui ruled as Pasha of Marrakech from 1912 until his death in 1956, amassing one of the largest fortunes in the world (reckoned to be $50 million) from harvests, stock, taxation, and (according to a Time Magazine article) a cut of the earnings of the 27,000 prostitutes operating in the Marrakech area. He has become a despised figure in Moroccan politics; he was, for example, a full ally of the French regime and conspired with them to successfully overthrow Sultan Mohammed V in 1953. His personal style and charm, as well as his prodigality with his wealth, made him many friends among the international fashionable set of the day. He visited the European capitals often, while his visitors at Marrakech included Winston Churchill, Colette, Maurice Ravel, and Charlie Chaplin. 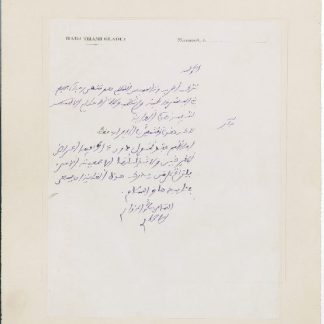