A catchphrase of radical Lutheranism, apparently quoted ironically by the Cardinal to expose the extremism of his opponents: "Incipit hareticus fieri, qui scripta Lutheri / Carpit, et infernum, ni resipiscat, adit" ("He who attacks Luther oversteps the threshold of heresy, and, unless he repents, goes to hell"). The Strasbourg Protestant theologian and Hebrew scholar Tobias Speccer (1563-1622) quoted the lines (in a slightly more extensive version, with variation) in his essay, "De vera Iesu Christi Ecclesia & Pontificia Romana opposita", published in 1617 in an academic volume celebrating the centenary of the Ninety-Five Theses, the primary catalyst for the Protestant Reformation. In this context, they give evidence of the extreme reverence Luther enjoyed among his disciples more than seven decades after his death.

Cardinal Commendone had performed various papal missions to the courts of Protestant rulers. The numerous letters which he wrote during his 1560/61 mission to Germany to invite the Catholic and Protestant Estates to the re-opened Council of Trent present a picture of the ecclesiastical conditions in the country during those times.

Some worming. 18th-century authentification note ("Autographum Cardinalis Commendone") in red ink at the foot of the clipped page. 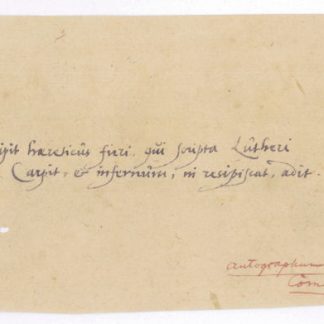