Memorandum of agreement between Churchill and his publisher for the rights to publish Churchill's "Europe Since the Russian Revolution". One of the few literary projects that Churchill ever abandoned, his projected work on Europe since the Russian Revolution would surely have been a fascinating addition to the Churchillian canon. This contract with Harrap called for the author to receive the generous amount of £13,500, payable in installments: £1,500 up front; £2,000 on the delivery of the first part of the manuscript; £3,000 on the delivery of the second; and £7,000 on delivery of the third. These payments would be in lieu of any royalties. The contract calls for the first portion of the manuscript to be delivered by no later than June 1941, with Churchill obligated to return his advance with interest for failure to do so. Since this is precisely what happened, this paragraph is boldly marked thrice in pencil in the margin.

Churchill's demanding obligations as member of the War Cabinet and then as Prime Minister and saviour of Britain in 1940 did not leave Harrap in a forbearing or forgiving mood when Churchill tried to get out of this contract. Indeed, his growing stature made him all the more valuable as a literary commodity. As called for in paragraph 10 of this document, the matter went to arbitration, with Churchill arguing that he had completely lost interest in the subject of Europe since the Russian Revolution. In any case, he was in no position to do anything about it: "I suppose I have not read a dozen books in the last five years." Besides, he added, writing about Russian relations might injure the delicate wartime alliance with Stalin. More than anything else, however, Harrap's hardball tactics annoyed him. When the publisher offered new contracts with much more generous terms, Churchill curtly refused, saying "I do not want to have any further dealings of any kind with them." Realizing he was beat, Harrap unconditionally surrendered on 7 September 1944, saying "it is distasteful to us, whether we are right or not, to litigate this matter with a man to whom every one of us is so much indebted" (cf. Reynolds, In Command of History, pp. 19-20). Churchill gave back the £1,500 advance with interest and went on to publish his war memoirs with Macmillan and Cassell's. 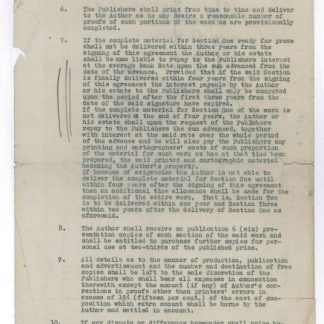