A group of 71 photographs of A Century of Progress, held in Chicago in 1933-34. They are by Kaufmann-Fabry, Official Photographers of the fair, and are so marked.

The "Century of Progress International Exposition", also known as the Chicago World's Fair, was held from 1933 to 1934. The fair buildings were multi-coloured and generally had a "Moderne" design to them in contrast to the neoclassical themes used at the 1893 fair. One of the more famous aspects of the fair were the performances of fan dancer Sally Rand. Other popular exhibits were the various auto manufacturers, the Midway (filled with nightclubs such as the Old Morocco, where future stars Judy Garland, The Cook Family Singers, and The Andrews Sisters performed), and a recreation of important scenes from Chicago's history. The fair also contained exhibits that would seem shocking to modern audiences, including now-offensive portrayals of African Americans, a "Midget City" complete with "sixty Liliputians", and an exhibition of incubators containing real babies. 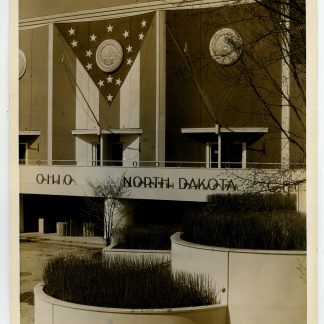