Original manuscript of the Hawaiian National Anthem, signed by the King

Autograph transcript of Hawaii's National Anthem which Berger composed in the year before and which is still valid up to now under the title "Hawai'i Pono'i". Its words were written by King David Kalakaua (1836-91), the last reigning king of the Kingdom of Hawaii, who dated and signed the present copy as "David M. Kahanonesi, Re Kai Hanola".

Berlin-born musician Henri Berger arrived in Hawaii in 1872, having been commissioned by the King to turn a handful of local musicians into a royal orchestra. Berger was closely affiliated to the Royal Family, served as Royal Bandmaster up to 1915, and acquired lasting merits for his efforts to transcribe literally hundreds of traditional Hawaiian melodies, saving them from oblivion.

Somewhat spotty, edges with some browning; small tear in the lower left margin. 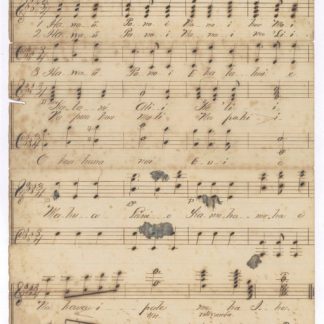