4to. 4 pp. on watermarked Albert Mühle paper, small corrections in ink throughout.

Manuscript of a poem written for Rose Thesing, who would become better known under her second married name, Hilferding, as wife and partner of the prominent socialist theorist and anti-Nazi activist Rudolf Hilferding. Dated by Becher in 1916, the poem consists of two sections "Abend" and "Morgen". The ink corrections throughout are small changes to insert capital letters or line breaks where needed, with a couple of small deletions and one word change.

A expressionist poet in his younger years, Becher would later embrace communism and Socialist Realism; following his years in exile during the Nazi period, he settled in East Germany where he became Minister of Culture.

Folded, as for mailing, and with some rumpling and a few creases. 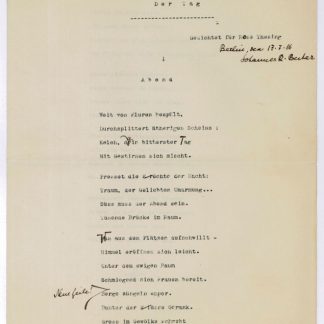