Fine collection of autographs by great tennis players, assembled by the young Uruguayan politician Alejandro Zorrilla de San Martin (1909-87; Foreign Affairs Minister from 1963 to 1965) by direct application. The French player Suzanne Lenglen signs a portrait card in October 1923, at the height of her Wimbledon career. The Argentine players Robson and Dumas sign their group portrait together, as do the Chilean brothers Luis and Domingo Torralva (with a 2-page letter, Santiago, 29 Oct. 1923, signed by both). Cochet "le magicien", one of the legendary "Quatre Mousquetaires", sends "une meilleur souvenir" on 6 Jan. 1934, months after the end of his stellar career as an amateur. 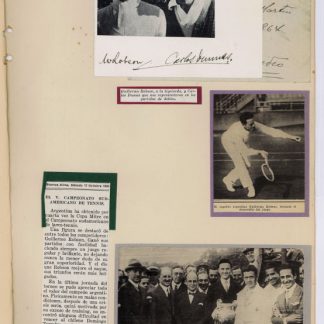