To secretary of state Nicolas de Neufville, seigneur de Villeroy. Catherine de' Médici was one of the great female letter writers of the Renaissance, drafting many of her political letters (as here) in her own hand. She had been Queen consort of France as wife of Henry II, but rose to political power after his death in 1559. She stood behind the brief reign of her eldest son Francis II and, upon his death only a year later, was appointed regent to her second son Charles IX (then only ten years old). He died in 1574, leaving Catherine to preside over the chaotic reign of her third son Henry III, a period of terrible civil and religious war in France. Despite the turmoil, Catherine was a remarkable administrator in a political landscape in which she could trust almost no one. The present letter, drafted in her own hand (in itself remarkable), is typical of her direct style. She informs the secretary of state, Villeroy, one of the few members of government with whom she was intimate, of her wish to grant the benefice of the Abbey of Chailly (on the edge of the Forest of Fontainebleau) to the marquis de Saint-Sorlin, son of the Duchess de Nemours (and later duc de Nemours and Henry I of Savoy). She also makes provision for the benefice of Martigny-le-Comte (Burgundy) and arranges benefices for the sons of the statesman Pomponne de Bellièvre (who later became chancellor of France). The letter is apparently unpublished. It does not appear in the collected "Lettres de Catherine de Médicis" (1880-1943, 10 vols.), though a letter of 13 November 1581 (vol. VII, p. 415) addressed to the duc d’Épernon, on the same subject, allows us to date ours with some confidence. 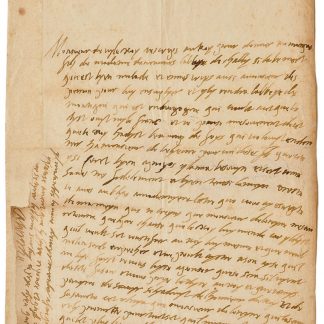