Trotsky, Leon, Bolshevik revolutionary and Marxist theorist (1879-1940). 3 (2 of which are autograph) letters signed (partly with paraph) and 1 typed telegram.

Interesting correspondence with his Paris lawyer Gérard Rosenthal. In the first two (autograph) letters - written from his Turkish exile - Trotsky gives an account of his endeavors to relocate to France. The typed letter (dated 8 December 1938) is written in Mexico City, where the exiled Trotsky was coordinating the activities of the Fourth International into opposition to Stalin. In his telegram of 10 April 1939, also written and posted in Mexico City, Trotsky expresses his worry for his first wife Aleksandra Sokolovskaya, who had been arrested in 1935 and taken to a labour camp in Siberia, where all trace of her had been lost in 1938. He is also worried about his grandson Vsevolod (Seva), the son of his daughter Zinaida, who had taken her own life in 1933. After the death of his father Platon Ivanovitch Volkov in Paris in 1936, Seva had been in the care of Jeanne Molinier, the ex-wife of the French Trotskist movement, who had known Volkov well and now claimed the boy for herself. Trotsky sought to have Seva join him in Mexico and ultimately won custody before the Mexican courts: about a year before Trotsky was murdered he finally managed to embrace his beloved grandson in exile. 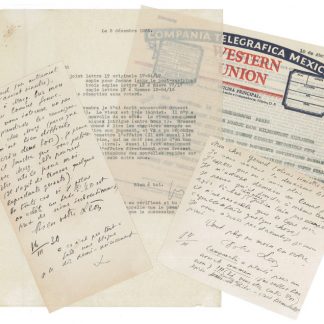