More than 150 letters by the famous mountaineer

A quantity of some 155 letters and postcards, including several addenda (postcards, clippings, photographs, etc.).

To Oskar Haaf, head of the entertainment department at the German radio broadcaster Südwestfunk Baden-Baden, and to his wife Ria: a copious collection comprising some 93 autograph or typed letters, 15 folded lettercards, and 47 postcards and photographs, with several addenda.

Trenker's friendship with the broadcaster Haaf, which dated from the prewar years, intensified in the 1960s when the busy mountaineer and film-maker began to concentrate on lectures, documentaries, and wide and varied appearances on radio and television. The numerous letters and postcards offer a lively account of their collaboration (including a long Trenker feature which entails a discussion about the classical music to be used), but also provide a narrative of the many years in which Trenker, ever bustling with activity, produced scripts, songs, radio shows, and much more. Among the subjects of the correspondence are Karajan and Kokoschka (whom he criticizes), the memoirs of Tilla Durieux (which he is reading), Ennio Morricone (whose music for "Once Upon a Time in the West" he praises), and his forged Eva Braun diaries (which he disowns). The collection expands the well-known image of Trenker as a popular mountaineer, showing him as an intelligent, active, and well-read man fully abreast with current developments even in his old age. 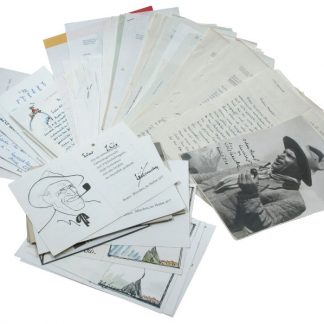