Principal work of rabbi Samuel Eliezer Edels (1555-1631), known as the "Maharsha" (an acronym for "Our Teacher, the Rabbi Shmuel Eidels"). His "Chiddushei Halachot" ("Novellae in Jewish Law") constitutes a commentary on the Talmud, Rashi and Tosafot together, and with a focus on Tosafot. "This commentary was quickly accepted and was printed in almost all editions of the Talmud" (Wikipedia). "This edition comprises the author's larger work, 'Hidushe halakhot', plus a smaller last recension, 'Hidushe halakhot mahadure batra'" (OCLC), the latter by Moses ben Isaac mi-Lublin (d. 1668).

Anton Schmid had been one of Kurzböck's apprentices and as such had been sent to the Vienna Oriental Academy to learn Hebrew. Schmid later bought Kurzböck's Hebrew types from the printer's widow and succeeded his former master, soon to become Austria's foremost printer of Hebrew, and one of the most capable ones on the continent. Imprint in Yiddish: “Vin, gedrukt bei Anton Schmid k. k. priv. deitsch- und hebreischem Buchdruker”. (The reason why a Christian businessman could rise to the honors of an "imperially and royally privileged Hebrew printer" was quite simply that, in spite of the 1782 Edict of Tolerance, Jews were still prohibited - by an older law - from operating a printing press.) - Browned throughout; first three pages professionally remargined. Contemp. Hebrew ownership to title-page. 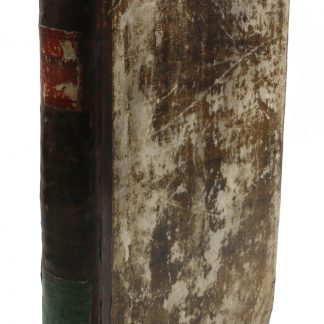