The nucleus of "Arabian Sands"

The famous British explorer's extensive account of his expedition in the interior of Oman; much of the territory crossed now is part of the United Arab Emirates. Thesiger (1910-2003) set out from Abu Dhabi in 1948; the large and detailed colour map shows his journeys from 1945 to 1950.

Thesiger later expanded on the subject to produce his classic travelogue, "Arabian Sands" (1959). Thesiger's highly regarded photographs depict the desert of the Empty Quarter, a settlement at Liwa, sand vegetation after heavy rain, a falconer mounted on a camel, a peregrine falcon with a caught hare, peregrine falcons on the blocks, Sheikh Wahiba of Yahahif and a young Wahiba girl, a thoroughbred Batina camel, the Farai well in Wahib country, portraits of Musallim bin al-Kamam and Salim bin Kabina, and a view of Jabal Kaur from the wadi Saifam. The paper was read in the presence of the Second Secretary at the Saudi Arabian Embassy, H.E. Abdul Rahman Halassie. 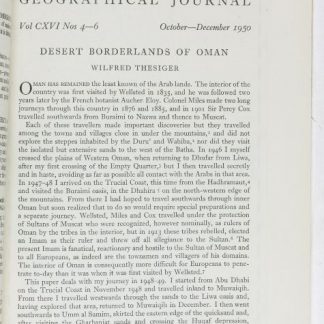