A fine letter from the artist, addressed "Dear Miss [Irene] Rosen", in response to her enthusiastic letter written after a viewing of his sculptures at the Art Institute of Chicago (a carbon of her letter is present). In a substantially better than ordinary response by the sculptor to his public, and after apologizing for the delay in his response, Moore writes: "[...] As to your touching the pieces of sculpture at Chicago, you were right and the guards were wrong. If you can get a better idea of the volume of the mass, of the depth of the space and of the hardness of the material by touching a sculpture as well as looking at it, you must do so. I much enjoyed seeing a work of mine which had been in a museum in a mining town in England for many years and which had become dirtied in places where the miners, dropping into the museum on the way home for work, had run their hands over it". In response to her query about the possibility of reproductions of his sculptures, he writes "As to reproductions, I don't think they are worth making unless they're good; it's the same thing with pictures [...] reproductions of sculptures [...] can't be any good unless each cast is worked on by the artist -- and no artist has time to do that to a large edition of reproductions [...]". He details how his editions of bronzes are produced, comments on their availability and price ("which is, I imagine, more than you can afford to pay"), and responds to her complaints about the inadequacy of the reproductions of photographs in J.J. Sweeney's book: "In feeling the limitations of photographs you are certainly on the right lines [...] a reproduction in a book can never have the same beauty or fidelity as an actual photographic print [...]". He concludes in appreciation of her "genuine and intelligent interest" and notes that he his sending her separately a photograph (not present) of his latest carving. Signed in ink, "Henry Moore". 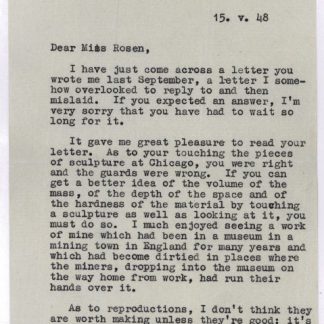