The world's first city, depicted with the image of a white falcon

Extremely rare, uncommon print describing the legendary Biblical city of Enoch, the "first city of the world", founded by Cain and named after his first son (cf. Gen. 4:17). The centre of the sheet shows a large (264 x 152 mm) view of the city (workmen erecting the walls in the background; Cain's family farming in the foreground), with numerous animals including elephants and lions. The smaller engravings to the left and right (130 x 85 mm each) show pumpkins ("Pepones"), a white falcon, a crane, and several marine animals (including a seal, dolphin, and sand flea). To the left and right of these are columns of letterpress text describing the city in eight twelve-line verses.

The style of the view is obviously closely related to the illustrations familiar from the Prague engraver Jan Hiller (active 1716-46, cf. Dlabacz, Allgemeines Künstlerlexikon für Böhmen I, 628-631), who also provided the plates for Myller's "Peregrinus in Jerusalem", a work that not only contains several topographical views, but also botanical and zoological illustrations. The Myller plate "La Ragna, die Meer-Spinne" shows several of the marine creatures depicted here in exactly the same fashion: clearly, Hiller re-used his work for the present broadsheet. This conclusion is further supported by the fact that the five plates evidence varying degrees of wear: while the large, central illustration shows good, strong contrast, the other four are markedly fainter. 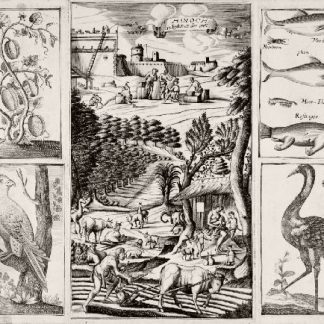