One of Thomas Mann's last letters: to the publisher Kurt Desch (1903-84), for whose anthology "Die schönsten Erzählungen der Welt" (Munich 1955) Mann was to write a preface. In July 1955 the Manns travelled to the Dutch North Sea resort of Noordwijk. On July 17, Thomas Mann there started work on the preface, which he completed four days later. A serious illness forced him to cut his stay short and return to Zurich, where Mann passed away on August 12. The "Preface" thus became his literary legacy. 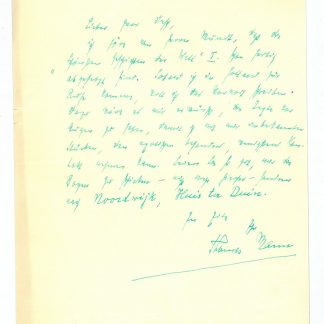