In German, to an unidentified member of the Wagner Society of Cologne, about a scheduled concert at the Gürzenich concert hall and his participation therein: "[...] I am quite satisfied with its programme, but I prefer to play the prelude to Lohengrin instead of the Ride of the Valkyries, which I really dislike to play, not least because of the enormous orchestra necessary [...]". Moreover, Wagner discusses concerts he refused to give at Leipzig, Dresden, Breslau, Prag, Graz, and Pest, as well as a concert at London which was organized by the British pianist and head of the Wagner Society of London, Edward Dannreuther (1844-1905). 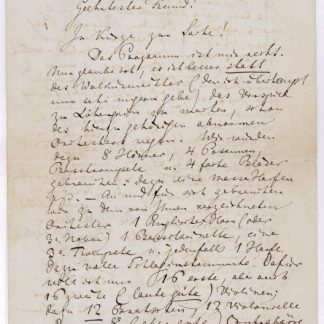