Important humanist edition, "the basis for all later editions" (cf. Hoffmann). Part 1 contains the Greek text with Greek marginalia and Latin critical apparatus, part 2 contains the various Latin translations by Frischlin and the learned Estienne himself.

Binding very slightly warped and with insignificant chipping to extremeties. Interior somewhat browned as usual; some brownstaining near beginning. From the collection of the English scholar and football champion Harry Chester Goodhart (1858-95), legendary goal scorer for the Old Etonians in four FA Cup finals and then, until his early death, Professor of Humanities at Edinburgh (his engraved bookplate to front pastedown). Later in the library of the Swedish collector Herbert Vilén (1908-68; his bookplate, designed by Oscar Furuhjelm in 1930, on front flyleaf). 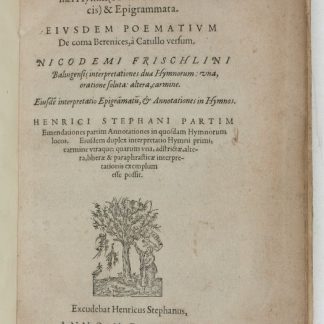