Whigham was a well-connected Scottish author who emigrated to America and worked as drama critic on the Chicago Tribune, and as a war correspondent at the Spanish-American and Russo-Japanese Wars. A close friend and correspondent of British Persian Gulf opinion-makers Lord Curzon and Sir Percy Cox, Whigham wrote the book, based on his extensive travels in the region, at the request of Lord Curzon, who had "advised [him] to go to the Gulf [and] instructed his subordinate officials in that part of the world to give me all the assistance in their power." Whigham is probably best remembered as a prominent amateur golfer, winner of the second and third US Amateur Championships, and author of "How to play Golf", the first golf instruction manual illustrated from action photographs.

Ink ownership stamp of Charles C. Sterrett, an American Presbyterian missionary to the Christian population in the region, to the front pastedown. Binding a little rubbed and spotted, endpapers foxed. Small inked library stamp and cancellation to the title page, otherwise very good. 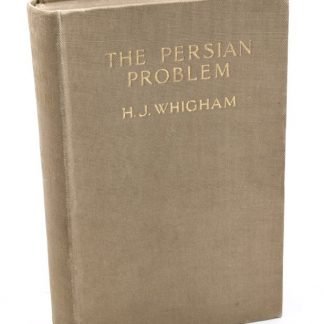