To Madame Charles de Gallaud. The gift of an autograph manuscript of the composer's lecture on La Fontaine's Fables replete with additions and deletions to an admiring patron. In his letter, Saint-Saëns writes in part: Since this manuscript has the honor of being desired by you, I am only too happy to offer it to you. I am giving it to you without pride, with its deletions and additions and even with the copy of the 'Fables' which I made to make up for the lack of a prompter; and experience has shown me that I did right, and that without that I would have been too brief; and I understood the absolute necessity for a prompter at the theater even for the actors most sure of their parts, despite the prodigious memory of most of them. This attempt at a meeting was well received, but I would not make myself a lecturer, it is too late. However, God knows if I should have anything to say about music! But many of the things which I should want to say cannot be said. Bad habits in music become widespread and one would have to criticize everyone! What to do, one against all! The task is impossible. And I would become the target of too many enemies [...]" (transl. from the French original).

In his manuscript, Saint-Saëns writes that instead of playing the piano, he is giving a lecture, but not at Madame Brisson's Annals in Paris, where he would feel outclassed, but in Algiers, where he has so often taken shelter from the winter and which has saved his life several times. "And now the war is over, it is permitted to have a little amusement". The talk will not be about music, but on La Fontaine's Fables, which he has loved since childhood, but has only come to understand upon constant re-reading. He speaks of La Fontaine's facility with verse, which is deceptive and "thanks to his musical ear, the harmony and equilibrium are such that one doesn't even notice the diversity of rhythms; he leads us whenever he likes, and we follow". He continues with a discussion of La Fontaine's morality and his keen eye for nature and art. He concludes: "La Fontaine did not just know how to paint, he knew how to observe; he studied nature, and he saw what others could not see. In the seventeenth century, in the age of Descartes, animals were thought to have no intelligence. La Fontaine dared to think otherwise, even if he did use animals to illustrate people's behavior".

Saint-Saens proceeds to recite two of La Fontaine's fables in closing. An important letter and manuscript revealing the composer's great interest and his admiration of La Fontaine. 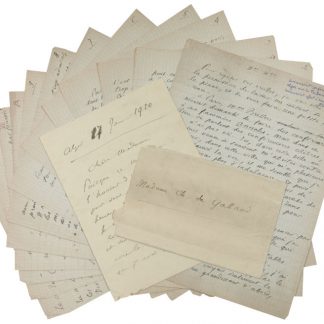