Elphinstone, Mountstuart. An account of the Kingdom of Caubul, and its dependencies in Persia, Tartary, and India: comprising a view of the Afghaun nation, and a history of the Dooraunee monarchy. The second edition, with an entirely new map.

Second edition of this detailed account of Kabulistan. The pretty engravings mainly depict costumes. "According to A. Janta, Elphinstone's encompassing scope and psychological insight have never been surpassed: for the historically leaning ethnologist, Elphinstone's work remains a source of the very highest caliber" (cf. Henze).

Occasional insignificant brownstaining. The pretty binding was probably prepared for Lt. Joseph Davey Cunningham (1812-51), who in 1849 published the standard "History of the Sikhs" (his autogr. ownership, "J. D. Cunningham, Caubul", on the flyleaf). Latterly in the collection of the Swiss industrialist Herry W. Schaefer. 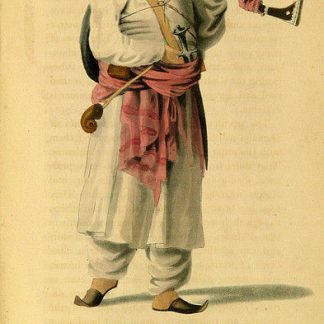 You're viewing: Elphinstone, Mountstuart. An account of the Kingdom of Caubul, and its dependencies in Persia, Tartary, …London, 1819. € 7,500.00
Add to cart