Weininger, Otto, Austrian philosopher (1880-1903). Archive collection, consisting of preliminary studies and drafts for his magnum opus "Geschlecht und Charakter" ("Sex and Character") as well as for "Eros und Psyche", together with notes and autobiographical writings.

Altogether c. 700 pp., mainly written in Weininger's meticulous handwriting, but also including some more perfunctory pages in Latin script, some shorthand. Numerous corrections and deletions. Some browning and wrinkling, occasional paper flaws to edges. Various formats, but mostly 4to (34:21 cm), as well as a few pieces in-8vo and small formats. Well preserved altogether.

Extensive and previously unknown partial estate of the ill-fated Austrian philosopher. Of outstanding importance for a scholarly study of the textual development of Weininger's principal work as well as for the biography of the controversial philosopher. The present collection mainly comprises preliminary studies and working drafts for his dissertation "Eros und Psyche", as well as for "Geschlecht und Charakter" ("Sex and Character"), the notorious magnum opus which he expanded from his dissertation. Also included are numerous citations and excerpts from Weininger's literary studies, several library order slips, some exercise books and letters, a portrait, and a short autobiographical statement, as well as his father's written permission that Otto learns how to handle a gun.

Weininger's major work, a precocious study of the relationship of sex and character which earned the author his Ph.D. degree, was dismissed at first but gained immediate popularity after he shot himself at the age of 23. The work remains a key document of Vienna fin-de-siècle thinking. In spite of his rabid misogyny and antisemitism, Weininger was considered a genius by the philosopher Ludwig Wittgenstein as well as the writer August Strindberg. 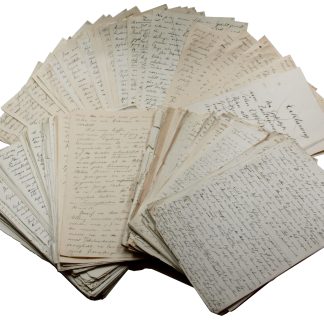