4to (165 x 213 mm). Arabic manuscript on polished oriental paper. 53 pp. on 28 ff. 19 lines, per extensum, written in a Naskhi script in black ink, some words in red, some marginal notes. Contemporary half leather binding over marbled boards with fore-edge flap.

The commentator Al-Qaysari, who flourished in Anatolia in the 14th century CE, both condensed and expanded on the work of Al-Jaysh, with the aim of providing a summary for students as well as adding his own perspective on the study of poetic metre and verse. He dedicated his effort to Emir Süleyman bin Tashun, an important political figure in Anatolia, who had commissioned the book. After a traditional introduction and long foreword, Al-Qaysari's work contains quotations from the original text, which he then juxtaposes with his own opinions. For his commentary, Al-Qaysari also drawn upon the standard works of Al-Khalil ibn Ahmad al-Farahidi (who first systematized the art of Arabic prosody) and Al-Khalil's student Al-Akhfash al-Avsat.

By tradition, Arabic prosody ('Arud) scans poetry not in terms of syllables (as in most Western languages), but in terms of vowelled and unvowelled letters, which are combined into larger units, which in turn make up feet. Sixteen types of metre are distinguished, some very common, others exceedingly rare.

The present copy was written in the early 18th century CE by a scribe who names himself as Ali ibn Muhammad ibn Ali ez-Zuhri es-Shirvani al Madani, a scholar who is known to have resided in Medina all his life. On the recto of the first leaf are a few later pencil notes which erroneously attribute the work's authorship to Al-Madani himself, though the copyist did indeed add several notes of his own supercommentary in the margins. 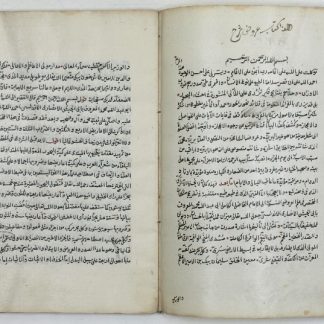