[Slave Trade]. Slave Trade. No. 4 (1877). Correspondence Respecting the Seizure of Slaves on board the "Rokeby" and "Koina" by her Majesty's Ship "Rifleman".

Rare documentary material on the interception of the ships and the seizure of slaves on board. British-operated ships continuously carried hajjis between Jeddah and ports in the Gulf, and the steamers were often used for the transport of slaves, sometimes with the cognizance of the captain. "The system of issuing tickets by the agents of British vessels at Jeddah without any name being inserted thereon, and the absence of passenger lists, no doubt render it extremely difficeult for the masters of ships to ascertain whether any of their passengers are slaves; and [...] it is one which cannot but place the gravest obstacles in our way in the suppression of the Slave Trade [...] The majority of the inhabitants of the Hedjaz and Yemen, from highest to the lowest, are interested in the Slave Trade, domestic slaves being a matter of necessity, servants not being procurable, what few there are bad [...] The Mahommedans consider the institution of slavery to be one of mutual benefit, and the slaves are geenrally the best dressed and best fed members of the household [...] It is very difficult to make any Mahommedan consider that slavery is a crime. He usually contends that the negro is recued from barbarism, and is taught the Mahommedan religion, and on that ground he defends the system; and indeed, he regards himself somewhat in the light of a missionary, and thinks he is extending his faith. The question is, therefore, beset with some difficulty [...]". 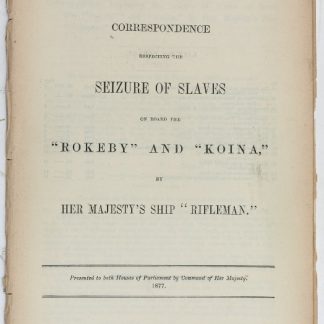