Second volume about the "Nedjed Country"

Brydges, Harford Jones. An account of the transactions of His Majesty's Mission to the Court of Persia, in the Years 1807-11 [...] To which is appended, a brief history of the Wahauby.

First edition. The second volume - and the map - are devoted entirely to the so-called "Nedjed Country".

"The first political and commercial treaty between Great Britain and Persia was concluded in 1801, when the East India Company sent John Malcolm to the Court of Fath Ali Shah. Persia undertook to attack the Afghans if they were to move against India, while the British undertook to come to the defence of Persia if they were attacked by either the Afghans or the French. When the Russians intensified their attacks on the Caucasian Provinces in 1803 annexing large territories, Fath Ali Shah appealed to the British for help, but was refused on the grounds that Russia was not included in the Treaty. The Persians thus turned to the French and concluded the Treaty of Finkenstein in 1807. It was against this background that Harford Jones, who was the chief resident at Basra for the East India Company, was sent to Persia by the Foreign Office in 1809 [...] The French who had now entered into a treaty with Russia (the Treaty of Tilsit in 1807) had lost interest in Persia and removed their political and military missions. Thus the British were able to conclude another treaty with Persia (the Treaty of Friendship and Alliance, also called the Treaty of Tehran) which bound Britain to assist Persia in case any European nation invaded her (even if Britain had a treaty with that nation). This treaty was not honoured by the British after the first Persian-Russian War" (Ghani). Volume 2 is devoted exclusively to the Wahhabis, tracing their history from the mid-eighteenth century to their defeat by Egyptian Ottoman forces at the site of the Wahhabi capital, Dariyah (Dereyah), in 1818.

Rare: the only other copy in a contemporary binding on the market within the last 30 years was the Burrell copy (wanting half titles and rebacked; Sotheby's, Oct 14, 1999, lot 127, £8,000). Only slightly browned and foxed (occasionally affecting plates), but altogether fresh, in an appealing full calf binding. 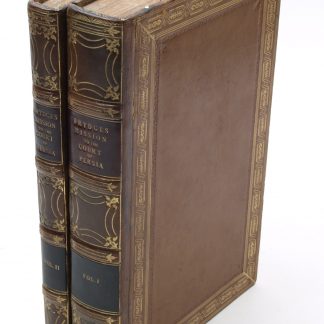