In 1683 van Leeuwenhoek wrote to Heinsius: "I have heard Mr. H. van Bleyswyk's high praise of Mons. Thevenot, and I am anxious to hear what that learned and curious gentleman will say about my statements" (Leeuwenhoek, Alle de brieven IV, no. 78). In 1688 he wrote to Thévenot directly: "A few years ago I took the liberty to send you a few of my modest ideas and observations, to which Your Honour replied in courteous terms. Now it so happens that, among several observations, I have discovered the circulation of the blood [...]" (ibid., vol. VIII, no. 111). The present fragment would seem to belong to the context of the former letter.

Identified by a slightly later hand on the leaf itself ("Dit is van Leeuwenhoek"); the backing paper has a note by a German 19th century collector.

The Delft entrepreneur van Leeuwenhoek is one of the most notable representatives of the golden age of Dutch science and technology. A draper by trade and a largely self-taught amateur scientist, he pioneered the field of microscopy and is hailed as the "Father of Microbiology". His instruments, built by a secret and carefully guarded method, achieved magnification of up to 275 times and more - a resolution not reproduced until more than two centuries after his death. "[O]ne can say with truth that [...] protozoology, bacteriology and microbiology begin with Leeuwenhoek" (PMM 166). Autographs by Leeuwenhoek are of the utmost rarity; not a single specimen has been traced in trade records. 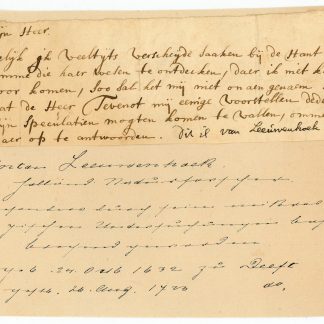