The autograph receipts are for the most part made out by actors at the famous "Theater an der Wien" and the "Burgtheater" (such as Franz Mayerhofer, 1786-1871) or their respective widows (such as Anna Hasenhut and Clara La Roche) and are mostly addressed to the Pension Fund established by the former director Ferdinand Graf Pálffy von Erdöd (1774-1840), who was head of both theatres from 1813 to 1825. Four bills are made out by employees of the Imperial and Royal Court Opera Theatre, who during a guest performance on April 12, 1862, invoiced the "Theater an der Wien" for several services (among them, e. g., the hairdresser Franz Ledwinna and a prompter). All signed and marked "to be issued" by the Burgtheater actor Karl La Roche (1794-1884), who was hired for life tenure in 1833, also directed from 1841 to 1874, and who performed administrative offices during the said guest performance. 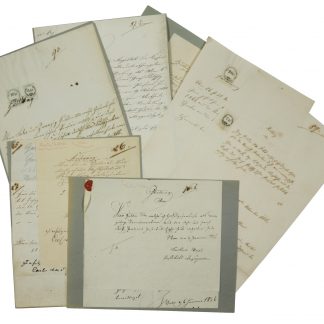