First edition of Labillardière's famous voyage in search of La Pérouse, with 44 plates, including 14 after Redouté

First edition of Labillardière's famous and finely illustrated narrative, a classic work of travel literature. The mysterious disappearance of the great French explorer Jean François Galaup de La Pérouse led to much speculation in France. On 9 Feb. 1791 the Constituent Assembly passed a decree ordering, among other things, that the King be petitioned to order the fitting out of one or more ships equipped with naturalists, scientists and draughtsmen, with the twofold mission of searching for M. de la Pérouse and of making inquiries relative to the sciences and to commerce. Two ships, La Recherche under the command of Rear-Admiral D'Entrecasteaux and L'Espérence under the command of Captain Kermadec, were fitted out. Proceeding via the Cape of Good Hope to Tasmania, they made extensive investigations of its coastline. They also visited New Caledonia, the Solomon Islands, the Admiralty Islands, Tonga, New Britain and other groups, making extensive inquiries, but found no trace of the missing navigator (cf. Ferguson). The voyage, however, yielded a vast amount of new and valuable information on Australia's natural history and the aboriginal people of Tasmania.

In the same year Janssen also published an 8vo edition, followed by several editions in French, German and English. In 1826 some materials from La Pérouse's ships were traced back to the island Vanikoro, and a 1964 expedition identified the remains of one of his ships there. Further investigations concluded that both both ships were wrecked there and that most of the men who survived the wreck were killed by natives. A few eventually left the island, but their fate remains unknown.

Each text volume has the library stamp of the British Admiralty Office on the title and final page, those on the title pages with cancellation stamp. Plates mounted on new stubs, a few plates slightly frayed along the edges, some mostly marginal foxing and occasionally other spots or smudges, more serious in the title pages and half-titles, otherwise in very good condition. 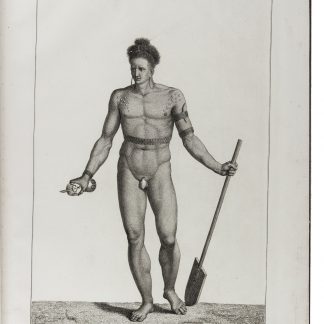