Large 4to. 1 p. with the integral address leaf attached.

In French, to the engineer Mr. Collier in Ghent, writing in part: "Here I am back home at last, where it seems I will not be disturbed. I saw the chancellor of France twice, the President of the Court of Peers, which is the only one with the jurisdiction to judge me, and it seems that they have no desire at all to treat me rigorously. I will probably be pardoned on the King's birthday at the beginning of November. I thought you would receive this news with interest, and I ask you to have the kindness to pass it on to your son in London, whom I will not write until later. The present letter has another purpose, as well, namely, to solicit your good offices for having several prospectuses of my work on the judicial institutions of England &c. distributed in Ghent, particularly at the school; they will reach you with one of the next couriers [...]". 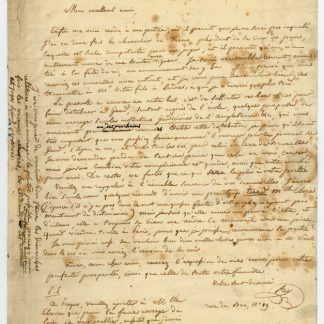