A torso of the first edition of this famous geographical directory of the British Indian Empire, and of the posthumous 1908 "New Edition". The Scottish historian and statistician Hunter, a member of the Indian Civil Service, is best remembered for having compiled the present work of reference work, which he first conceived in 1859. The first edition was published in nine volumes in 1881 (a second edition, augmented to fourteen volumes, was issued in the years 1885-87). After Hunter's death in 1900, Herbert Hope Risley, William Stevenson Meyer, Sir Richard Burn and James Sutherland Cotton compiled the twenty-six volume New Edition, which consisted of four encyclopedic volumes covering the geography, history, economics, and administration of India, 20 volumes of the alphabetically arranged gazetteer, listing places' names and giving statistics and summary information, and one volume comprising the index and atlas.

Removed from the Bradford Free Library (1881 ed.) and the British Library - Lending Division (1908 ed.) with markings as usual. Occasional insignificant spine wear; well-preserved in all. 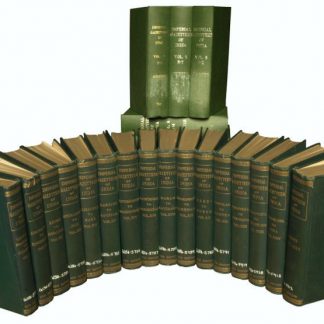