Early duodecimo edition of Della Valle's complete "Viaggi", published while the first complete edition was still under the press. Della Valle's account is highly sought after as one of the earliest printed sources for the early history of Dibba, the coastal region at the northeastern tip of the United Arab Emirates, today ruled by the Emirates of Fujairah and of Sharjah.

Pietro della Valle (1586-1652) left Venice in 1614 on a pilgrimage to Palestine, proceeding to Baghdad and then into Persia, where he married and sojourned in the court of Shah Abbas. While staying with the Sultan of Bandar Abbas, he "met the son of the ruler of Dibba who was visiting. From this he learned that Dibba had formerly been subject to the kingdom of Hormuz, but was at that time loyal to the Safavids who in 1623 sent troops to Dibba, Khor Fakkan and other ports on the southeast coast of Arabia in order to prepare for a Portuguese counter-attack following their expulsion from Hormuz (Jarun). In fact, the Portuguese under Ruy Freire were so successful that the people of Dibba turned on their Safavid overlords, putting them all to death, whereupon a Portuguese garrison of 50 men was installed at Dibba. More Portuguese forces, however, had to be sent to Dibba in 1627 as a result of an Arab revolt. Curiously, two years later the Portuguese proposed moving part of the Mandaean population of southern Iraq, under pressure from neighbouring Arab tribes, to Dibba" (UAE History: 2000 to 200 years ago - UAEinteract, online). "Della Valle displayed excellent narrative and descriptive skills, powers of acute observation, and a genuinely scholarly breadth of learning. He refused to comment on what he had not witnessed himself or checked against the best authorities" (Gurney). He continued his travels east to the coast of India, Goa and Muscat, and thence back to Aleppo by way of Basra. He reached Rome in 1626, where the original Italian text of his letters written to the Neapolitan physician Mario Schipano was published. Only the first volume, dealing with Turkey, saw print during his lifetime. The two-part volume II on Persia was released in 1658, four years after his death; in 1662 the Turkey volume saw a second edition, and the set was concluded in 1663 with the volume on India. A single-volume English translation of the Indian travels appeared in 1665. 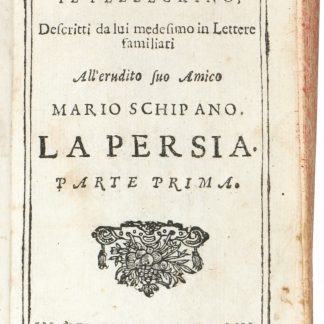