Egypt and Nubia in 45 early drawings and squeezes, preserving images of sculptures and inscriptions

Double Crown folio (48 x 36.5 cm). [37] ll. including title-leaf and 7 blanks, plus 16 loosely inserted ll. Album containing 42 pencil and other drawings (a few partly coloured) and 3 squeezes, some on the album leaves and some loosely inserted, mostly of ancient Egyptian and Nubian architecture, sculpture, bas-reliefs and hieroglyphic inscriptions, but also with a few botanical drawings and landscapes with buildings. Most have English-language captions in brown ink and are signed and dated 1838 to 1839. New black half morocco, on recessed cords, title and double fillets in gold on spine, using mid-19th-century marbled paper for the sides (blue-green Spanish-marble with black and white veins).

An album of drawings (and squeezes of bas reliefs) made by William Robertson on a journey from Cairo in December 1838 down the Nile into Nubia, reaching as far south as the present-day Egyptian-Sudanese border region, including the temples of Abu Simbel, in January 1839, then returning via Philae, Karnak and other sites to Thebes in February 1839. They give very detailed views of numerous buildings, sculptures, bas-reliefs and hieroglyphic inscriptions, as well as more distant views of landscapes with buildings and three botanical drawings. While Robertson made most of his drawings on site, he drew the Temple at Luxor after a drawing by Achille Émile Prisse d'Avennes (1807-1879) who began exploring and drawing the ancient Egyptian sites in 1836 and published many of his drawings in 1847. The squeezes of bas-reliefs are of special interest, for they preserve a very precise record of the original with little influence from personal interpretation: the paper was wetted, pressed into the relief and allowed to dry. In addition to the three clear squeezes, a couple of the drawings also seem to have been made on flattened squeezes (some of those that survive as squeezes also have some lines drawn over them them). Since many of the ancient Egyptian sites have been looted and damaged over the years, these early drawings and squeezes provide an important record of what was there in 1838/39 and how it was situated, before the first photographs were made. The building of the old Aswan dam in 1902 caused frequent flooding and damage at the site of Philae, now an island, and most of its treasures were removed before completion of the new Aswan dam in 1970. The album has no true title-page, but the leaf before the first drawing has a slip pasted to it giving the name of the artist, dated from Cairo, December 1838. We have not identified the artist. The clergyman and historian William Robertson and his son of the same name died before 1838 and the archaeologist William Robertson Smith was not born until 1846. Thieme & Becker notes two artists named William Robertson, active two or three decades before and after the present drawings, but provides so little information that we cannot link them to either. He may possibly be the Irish-born London architect William Robertson (1770-1850), who took an early interest in Egyptian revival, but he would have been nearly seventy when these drawings were made. The loosely inserted drawings and squeezes are made on at least 8 different paper stocks, wove and laid, one of the wove stocks machine-made (the "watermark" left by the papermaking machine's belt seam appears in one sheet). A few of the original album leaves are now detached and may have been removed by the artist himself. The squeezes have inevitably been flattened in the album, but they still show the contours of the original bas-reliefs very clearly. One inserted drawing is severely foxed and one inserted floor plan is rather dirty, but in general the drawings are in very good condition. A detailed graphic record of ancient Egyptian art, architecture and hieroglyphic inscriptions, made before many of the worst depredations. 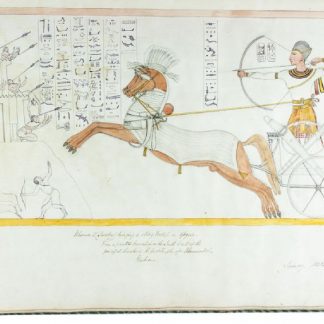